The  families central hangout on Talford Street was the home of   Louis and Gloria Chapmon .  I came to know the couple as Mr. Chapmon and Aunt Gloria.  Later “Gloria” would become a lifelong mentor  when she hired me for my first job at age 11.  Eventually the lure of  the suburbs resulted in my parent’s  friends moving from Talford Street.   Still come Christmas at least we would  all gather at the Chapmons in the Cleveland suburb of Bedford, Ohio.    Aunt Gloria, a native of Bermuda,  was always a glamorous host and great story-teller.  Part of her accent remained.

Aunt Gloria   was a school  official for the City of Cleveland for much of her career and a  was a Legacy Life member of the National Council of Negro Women (NCNW) .     She was also  close associate of Dr. Dorothy Height .  In fact Dr. Height attended  her  son’s funeral and her daughter’s wedding.  We all attended the  many luncheons and weekend activities for the many organizations that Aunt Gloria belonged – even on weekends during my college days when I would visit home,  my mom and I would go to one of “Gloria’s luncheons.”  In fact Aunt Gloria would come to Washington, D.C. and take me to events sponsored by NCNW.

She was also member of  the  sorority  Eti Phi Beta Sorority where she served as national president.  She was also honored with several awards from   numerous organizations and individuals  including  Congressman Louis Stokes (D-Ohio),  NCNW and the NAACP.

Growing up in  Bermuda   she   was a playmate to then Princess Elizabeth.  No surprise the Queen held audience with her former chum a couple of times .    Aunt Gloria also  traveled with  Leon Sullivan’s African Summit with her daughter to  Gabon, Morocco,  Zimbabwe and South Africa.  Hers was a life well lived for herself and for others.   She also met with Nelson Mandela at the South African Presidential Palace. 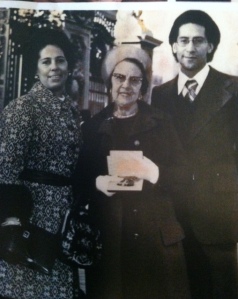 Aunt Gloria, Her Mom and Her Son in front of Buckingham Palace

We all need people who can see in us something that others don’t see or can’t seem to grasp.    For me it was my “Aunt Gloria” who while not a blood relative was every bit as important in helping to shape the fabric of  the woman I am today and the woman I hope to become.    She passed two weeks ago but I still see her smile and  hear her laugh.

2 thoughts on “Memories from Talford Street: A Mentor Extradonaire”