Inspiring Boomer: Toni Lewis, 10 Years of Bringing Music and More to the Lives of Children

In the spring of  2004, Bowie resident  A. (Arethia) Toni Lewis decided it was time to leave her six-figure job at GSA. She wanted to pursue her dream of giving back to her community through education.   One of the Washington area’s premier event planners,  she had was involved in planning for both of President Clinton’s  inaugurals and served as CEO for  inaugural planning for President George H   Bush.
Toni, and a  friend musician Richard Payne, were concerned about  broad cuts to music programs in the Prince George County school  system and the lack of exposure young people in the region had  to a broad range of music (other than rap and hip hop).   Toni with her friends from all over the music industry (including  jazz artist Ski Johnson and Jerry Butler) launched FAME: the Foundation for the Advancement for the Advancement of Music (www.fameorg.org )

A. Toni Lewis, Founder of
FAME:Foundation for the Advancement of Music and Education

To finance the operation, she just  HAD just her retirement savings and initially held a fundraiser to offer scholarships.Since then, The Foundation for the Advancement of Music and Education  has partnered with professional athletic teams, public schools, government officials, media outlets, theatres and dance companies.  It sponsors concerts throughout the DMV with music of ALL KINDS. 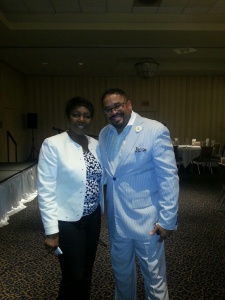 The organization has furnished public schools and youth with music programs with new & used instruments.   It also sponsors -two intense summer music technology camps that includes music, technology and academic programs, giving students access to the finest college music professors, instructors, musicians and technology in the music business. The camps are in partnership with the University of Maryland School of Music & Bowie State University Fine and Performing Arts Center,  Toni has advised the city of Philadelphia and the Lincoln Center in New York on  youth music programs.